Since its foundation in 1995, Braemar College has helped students from around the world enter top Canadian colleges and universities. During this time we have also welcomed a growing number of local Canadian students or students with permanent residency.

In 2020, as part of the 25th anniversary celebrations, we began to set aside each year a number of subsidized spots exclusively for local Canadian (or permanent resident) students.

We offer grades 9 to 12 of the Ontario Secondary School Curriculum, and our rich extracurricular programming is designed to help each student to develop his or her own special talents and abilities.

Our school has an academic year consisting of four nine-week terms (sometimes called “quadmesters”). This allows a full-time student to focus on two courses at once.

There is also an academic summer term (July to mid-August) consisting of 6 weeks. As a result, during this summer term the school day is slightly longer.

A typical day for a high school student during the academic year (September to June) would consist of one class in the morning and one in the afternoon. But with a third period in the later afternoon students have additional options.

Each day we have three periods:

Virgenia Lemieux started teaching at Braemar College in 1997 and was named Principal in 2016. 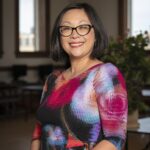 “Our school founder and my mentor, Mrs. Sheila McDonald, instilled a love of learning in our students and inspired our teachers. ‘If a student is comfortable,’ she often told me, ‘they will gain confidence to continue to develop learning skills and find their passion.”

Virgenia Lemieux holds a Bachelor of Arts Honours Degree in English and Dramatic Arts, and a Bachelor of Education degree in Concurrent Education from Queen’s University.

Our faculty is a team of committed and experienced professional educators, all certified by the Ontario College of Teachers, and many also holding advanced academic degrees. Learn more about our faculty here.

Braemar College is located in a downtown heritage property on the southern border of the St. George Campus of University of Toronto. It is a safe, lively neighbourhood, close to public transportation connecting our campus to all parts of the city.

At Braemar College, learning continues beyond the classroom. Our Director of Student Experience, Mike Helsby, has created a rich variety of extracurricular activities for students of all ages and interests. You can learn more, and see Mr. Helsby talking about his programming, here.

For more information, or to arrange a personal consultation, please contact Tamara Konoval, at tamara@braemarcollege.com